Saturday headed up to Big Waters.  I was slightly later than usual due to a bit of beer watching on the previous evening.  There was no problem getting to the car park but once there I couldn't get out but 2 kind visitors from Surrey gave me a bit of a push and I took the car back onto the main road, met them later and took them into the hide, really nice couple, became even nicer when I found out the husband was a Squaddie.  The birds on the pond were restricted to the 15% in the North West part of the lake that was not frozen with quite a few venturing onto the ice. 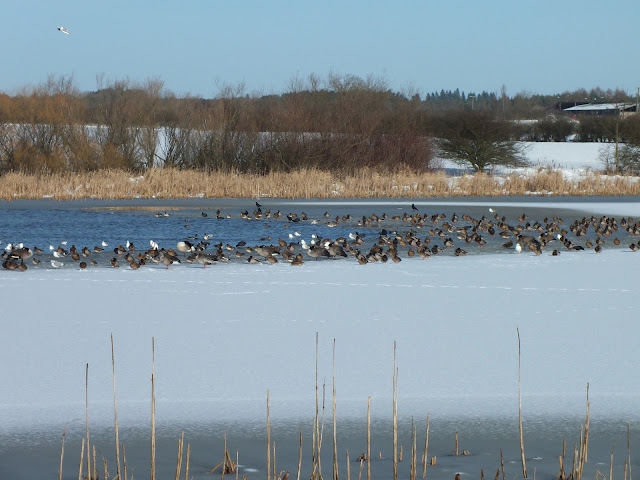 Another shot with a deer bounding through the snow 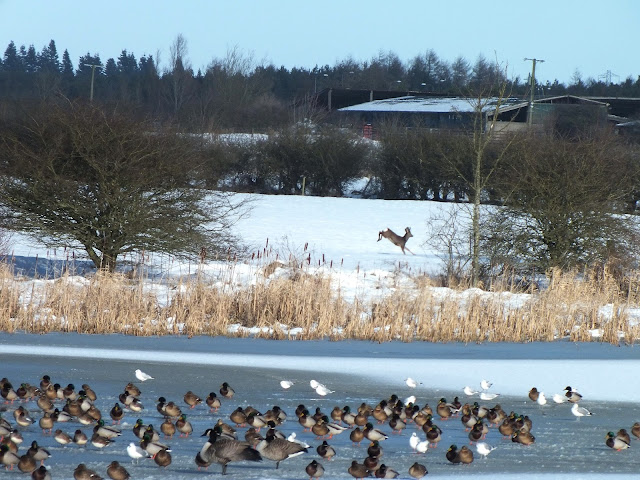 The Feeding Station was alive with small birds feeding and even more popped in when Alan J arrived and replenished the feeders and tables.   At least 5 Robins seemed to feed close without any animosity.  Up to 5 Reed Buntings, uncountable numbers of Blue and Great Tits with the Tree Sparrows all coming in together then vanishing  for a while then returning.  A few Yellowhammers put in an appearance and the 2 Willow Tits were once again in and out in a flash on numerous occasions. 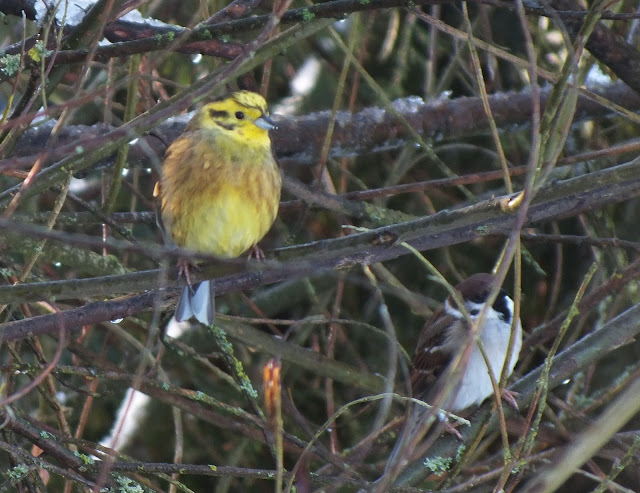 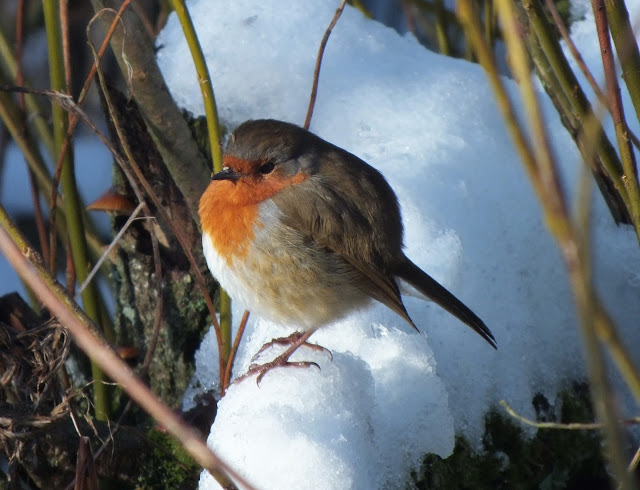 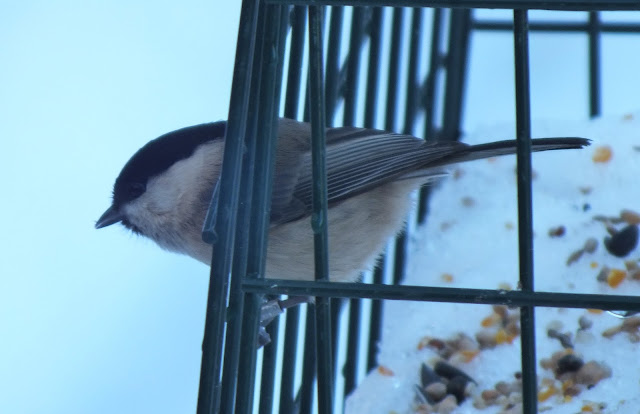 The best bird of the day was without doubt the Peregrine which zoomed in at the Ducks and we got some great views, unfortunately my camera was still in the bag.  4 People in the hide saw a Brambling but it was gone by the time I got round there.  A good day which ended badly when I reached the car (which if you have read any of this drivel further up the page, I parked on the main road) I realised I had left my bag in the hide and had to walk all the way back.

On Saturday I woke early at 4 and was all sorted and ready by 6 so what the hell, off I went to Holy Island.
The Cattle Egret was eventually spotted in the Garden of the White House just off the Crooked Lonnen but only bits at a time as every time it moved you saw a bit more but a bit vanished.  Eventually it took to the air but flew further away although was viewable fully in the scope.  A Long-eared Owl also took to the sky at the same time and that also dropped onto a fence and was viewable through a scope also.  Now I did manage a few snatches of some of the worst video I have ever taken (I feel like I have typed that sentence before) but at least its a record.  You must watch it all the way through (45 secs) cos I put on another bird that I videoed from the Causeway, a Long-tailed Duck which when I pulled up to see if anything was there a lady kindly pointed out that there was an Eider with its baby swimming around.  She was so nice that I thanked her profusely and then she left.  I have been known on many the odd occasion to misidentify birds but what the hell she looked so happy to see them I just couldn't say anything (now let me think, who do I know who would have put her straight immediately......nobody, cos there all such nice people)  Anyway Warner Brother Pathe Hall Productions

The Black and White Show

My new miniature Feeding Station at work (Newcastle College) is now operational.  I finally sorted it out over the last couple of days.  Its just a peanut and seed feeder, a couple of fat balls and a cat bird watering dish.  Yesterday I only saw a Dunnock and a Bluetit with lots of Gulls and Magpies flitting around.  This morning though about 11 as I was discussing the merits of setting a spreadsheet up so you could just put in a DOB and find out how old the student is when a movement out of the corner of my eye made me stop the conversation.  The tree with the feeders on is only 10ft from the window (which I dont think has ever been washed on the outside) but I recognised a Goldcrest straight away then lo and behold another 2 hove into view.  They just pecked away at the branches with the feeders on but obviously not sampling their delights.  I scrambled for my camera and eventually focussing through the dirt I managed 2 shots.  I was over the moon, even though I have seen plenty obviously, I never expected to see one let alone 3 in
The Toon. 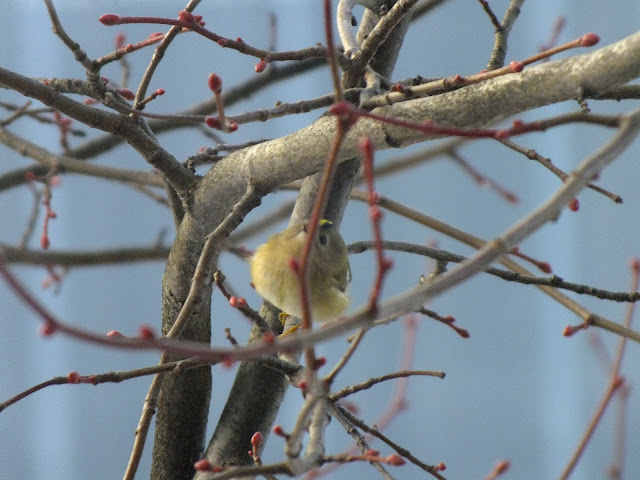 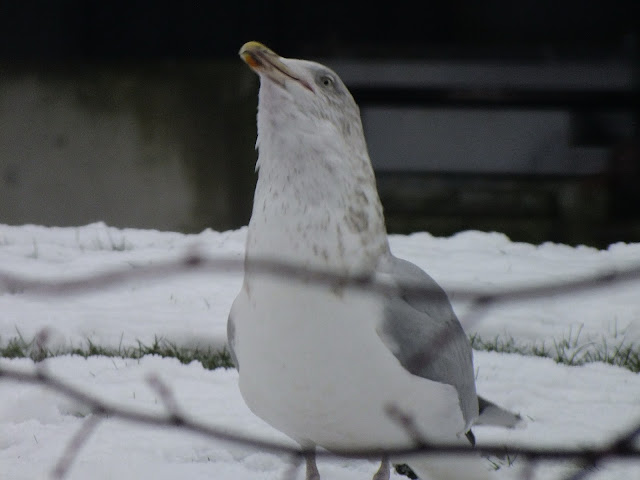 Meanwhile back in the Garden, Carole reports 5 (3 Male and 2 Female) Blackbirds, a couple of Coal Tits and the normal crowd with the exception of Collared Doves, not one seen for a few days.  Also not a Siskin in sight
Posted by HowdonBlogger at 19:35:00 No comments:

Not Much Birding This Weekend

I had a non birding weekend planned as Carole wanted to make a couple of visits but the best laid plans as usual go to pot.  Do something off the cuff and it normally works out well but our trip on Saturday was cancelled due to a few minor problems but even then I still only managed an hour on the coast and 2hrs at Big Waters.  The same happened on Sunday, didn't get out of the house until 09.05 and was back by 13.00 but Carole couldn't be bothered to cook so we headed out for a meal.  Most places were full so we hit the Fish Quay and a massive fish and chips each in the car at the Middens Car Park was much better than sitting in a restaurant acting proper.  We had 45mins of hilarity, listening to Radio 4, watching the public walking by, observing the birds swooping down for discarded food and the couple in the next car to us have the same worldly fare as us but using proper trays with the spongy bottoms, proper cutlery, a salt, pepper and vinegar set, napkins, tea in a flask and milk in a bottle, then washing and drying their cutlery (I thought we were bad keeping salt, vinegar and placcy forks in the boot).  When we were leaving Carole did mention that maybe I should take our picnic hamper next time so Sedgy Warbler and I could eat our MacDonalds and them flat square things that Sedgy eats in style.  We did do a scour round the Fish Quay, Low Lights etc but no sign of the White Seagulls.

Here is a few pics I took whilst out on Saturday and Sunday in no particular order.

Big Waters - I actually took this last weekend but the colour is so
nice I just wanted to post it, also we probably wont see scenes like
this for a while if you believe the BBC Weather Forecasts 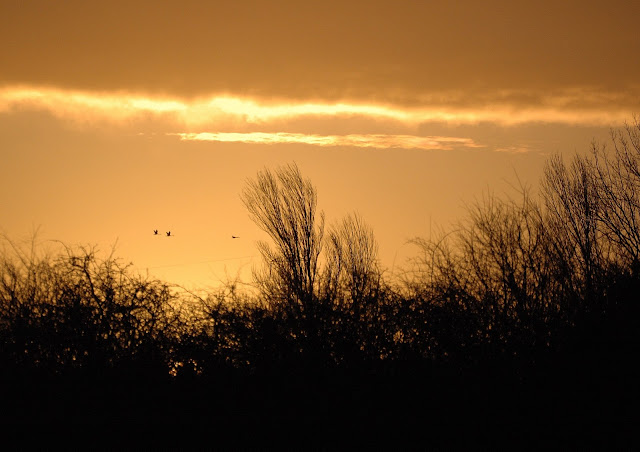 A couple of the 13 Cormorants we saw yesterday at
Big Waters.   A very high count for January 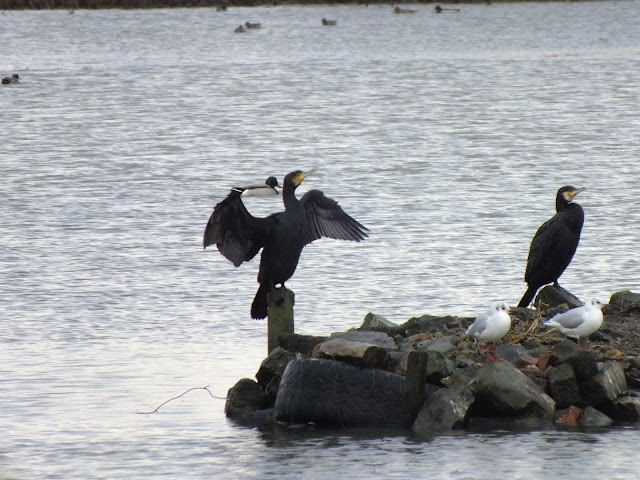 At last I managed to get a glimpse of a Willow Tit outside of the Feeding
Station at Big Waters.  It doesn't hang around for photographers though. 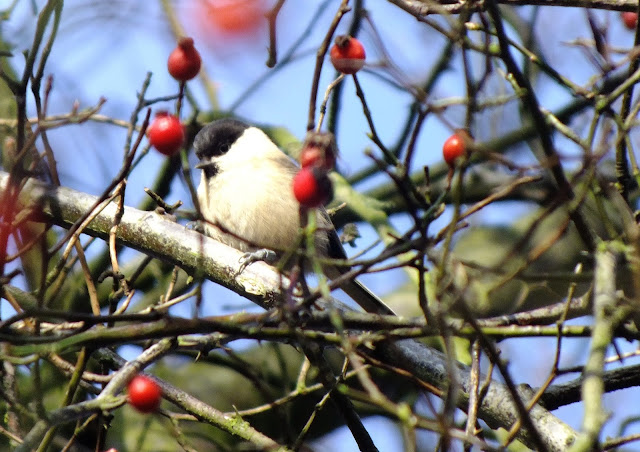 About midday a lot of the birds in the area started moving around.  This is not
a common occurence but to see 3 male Pheasants take to the top of
the trees was not something I can recollect seeing. 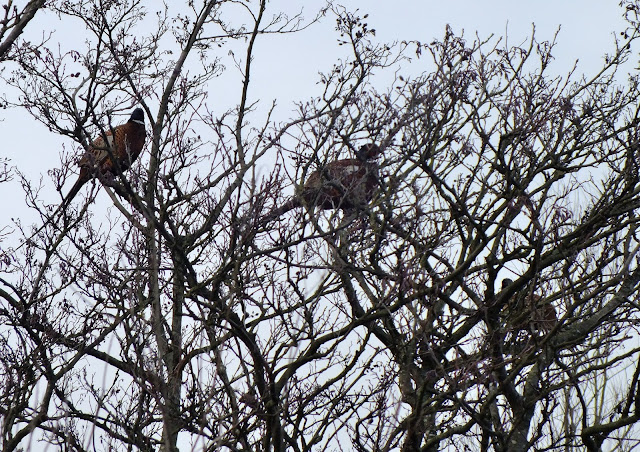 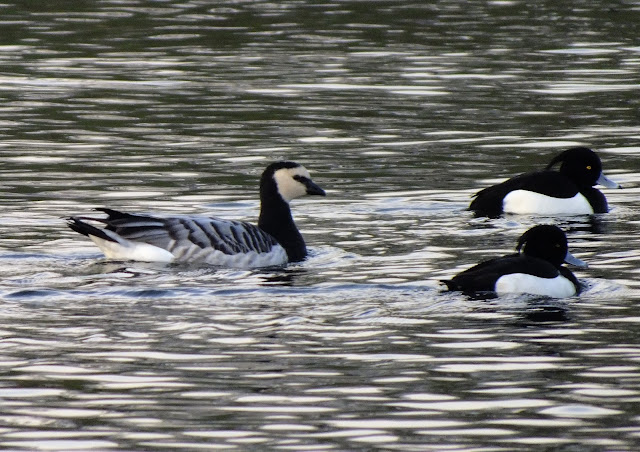 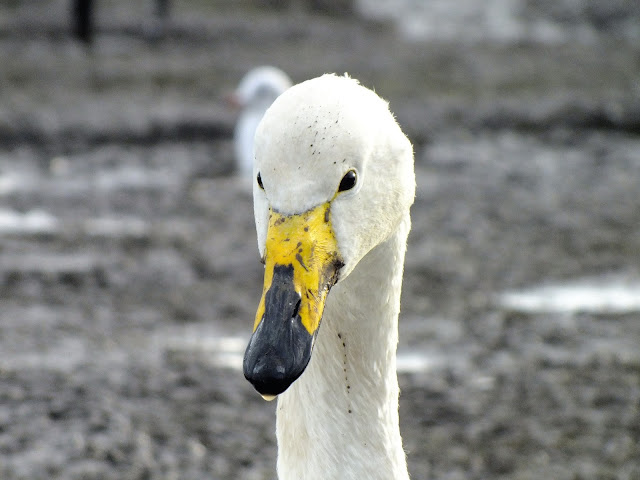 Then as a few Mute Swans came over a familiar one stopped in front of me - TBX - the female of the pair that has been breeding for quite a few years at Big Waters (must be on its holidays or probably a City Pond Break).  There was a male with her which had the same attributes (bolshy and aggressive) as her partner.  We presume they must be doing the same as last year when the pond was over-run with Swans and they vanished for a while but where the only ones to successfully breed on their return 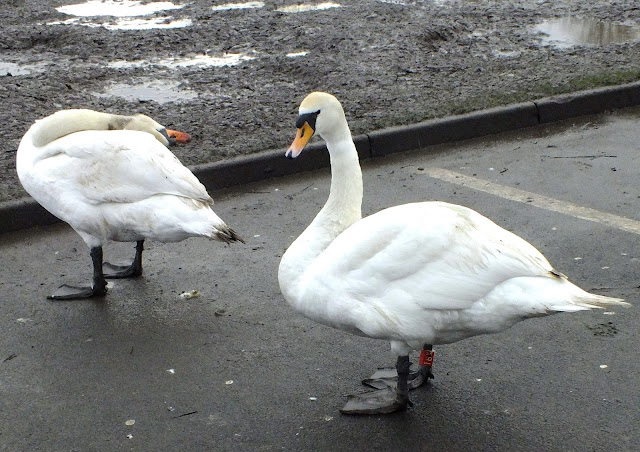 Finally a collage from January 2012 showing some of the Wildlife we
observed last year.  Note the 3 weird species of Wildlife in the top left corner 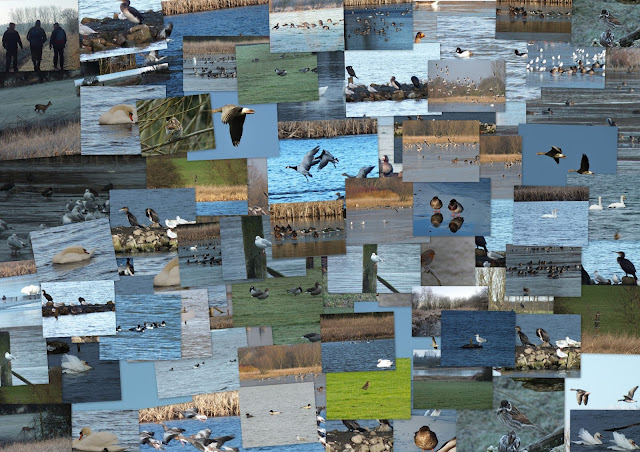 On Saturday John and I headed down to Teeside for our first outing of the year.  Whilst not having any specific target there was quite a few birds to be on the lookout for although the highlight of the day turned out  to be none of them.  As we were sitting in the main hide at RSPB Saltholme the majority of the birds took to the air and scattered and then a small raptor landed on a post about 60m away.  My god it was a Merlin and whilst I had seen a few 1 or 2 sec glimpses of a few in the past with the words "Its a Merlin" normally only being spoken as something vanished out of view this one sat on the post, albeit a bit distant, for some 11mins 11secs.  I already had my video out so it only took a couple of secs to start filming from start to finish whilst I viewed it through a scope. 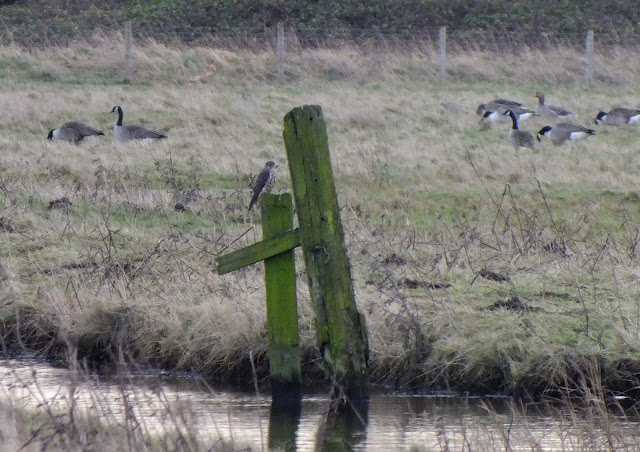 An exceptionally good day was had with the Fishcake and Chips as good as ever from Seaton Carew and the leftovers being used to attract the odd bird or two. 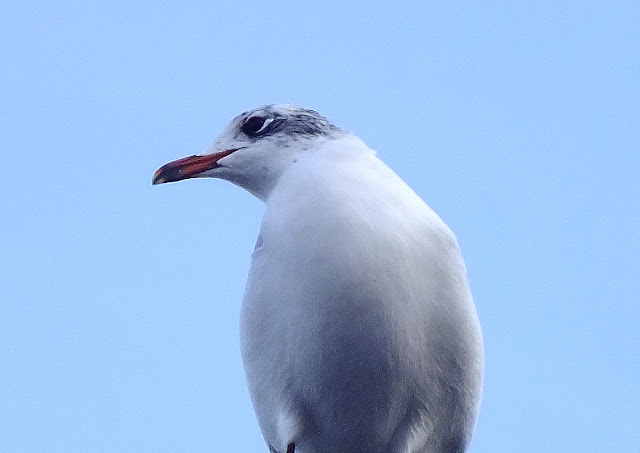 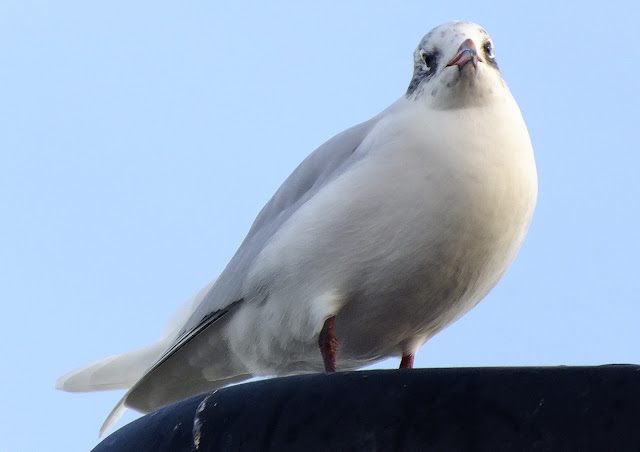 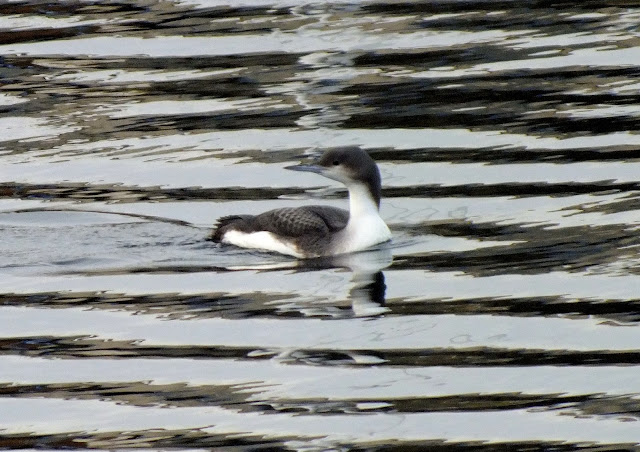 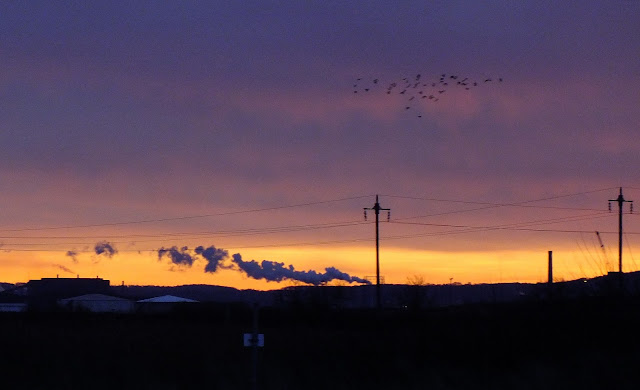 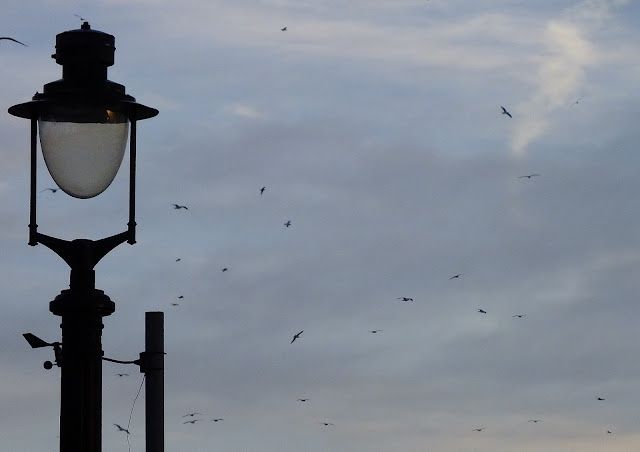 Sorry, Only Got 4 and a Half Minutes

New Years Day and a visit to Big Waters where I got off to a decent start with some quite nice sightings.  Check the Sightings Book in the hide where all sightings are written down by the visitors to enable anyone visiting to see what is happening on the reserve (Noted there was no visitors to the reserve for quite a few days over the holiday period as nothing had been written in the book!!).  Thanks to the people who do write something in.

I then headed off to Leazes Park, to see the Slavonian Grebe, which is a place where I do drop in a lot but normally during the spring and summer when there is light and free parking before 8am but even when you are willing to pay after 8am finding a space is like trying to find a bloody Hen Harrier in Tyne and Wear.  Managed to keep standing up in the bloody awful wind and get a couple of record shots. 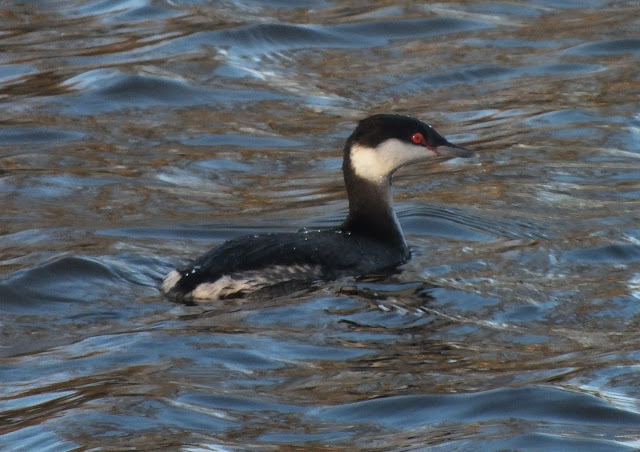 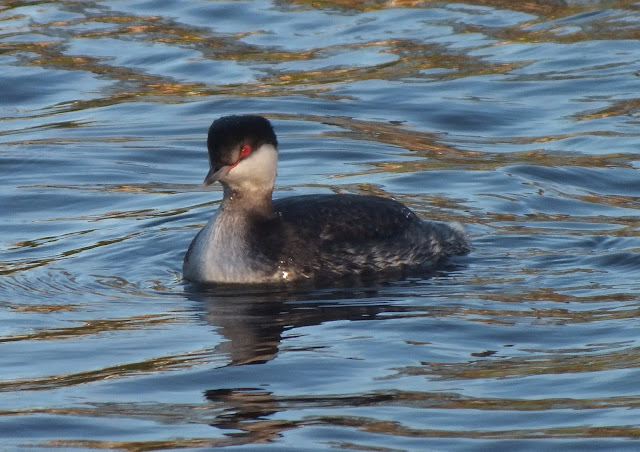 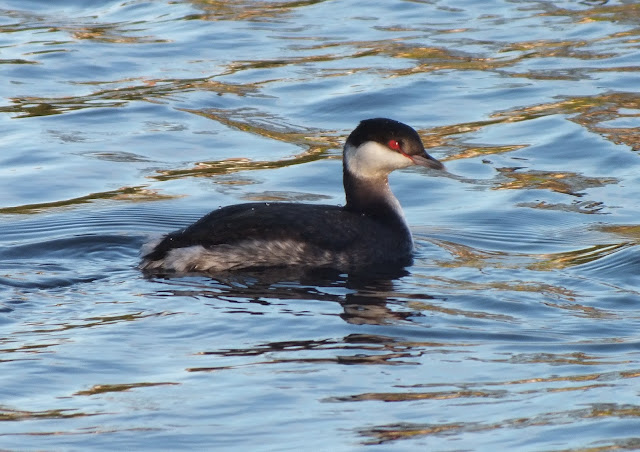 All done in 4 and halfish minutes
Posted by HowdonBlogger at 06:56:00 3 comments:

Managed a short visit to Big Waters yesterday and to St Marys today.  Nothing unusual but just 2 of my favorite places to pass the time of day away.  Did a bit of videoing and the following are a compilation from each.  The main bird at Big Waters, once again, was the Willow Tit and at Whitley Bay the Sanderlings were once again the most populous.

Well thats the year ended with my 2nd Year of keeping count and ending with the patch (Big Waters) increasing by 5 from last years total to 117,  Northumberland ticks were down by 8 to 189 and UK count down by 23.  Even though the figures were down overall I got more pleasure in increasing my patch count.  12 lifers this year also brought my overall total to 270.

Finally a couple of my favorite pics of the year 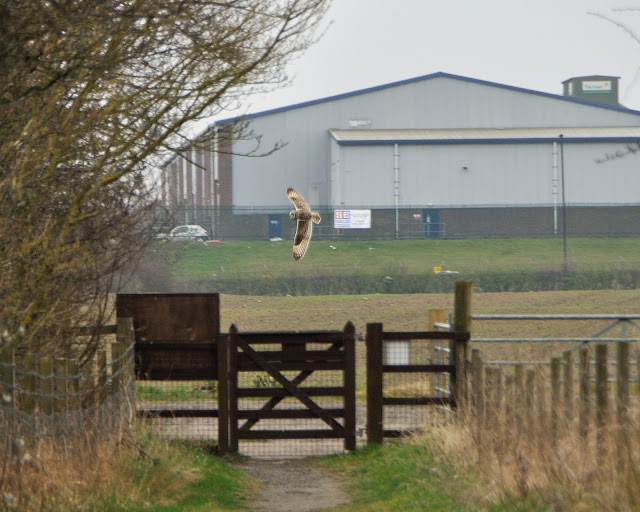 This female Blackbird built a nest in the hedge in my garden and
I watched it for a few weeks then it started sitting but vanished
after a couple of weeks leaving 2 eggs in the nest. 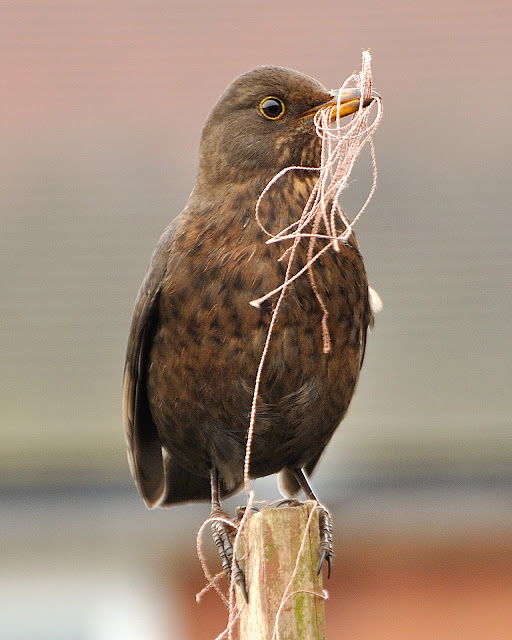 My Garden list stands at 40 this year which isn't bad but would have been
41 if Carole had managed to keep the Waxwings there that dropped in for
a feed on 12 Feb for more than an hour then phoned me after they left.  She
also produced over a 100 photographs of them when I got home. 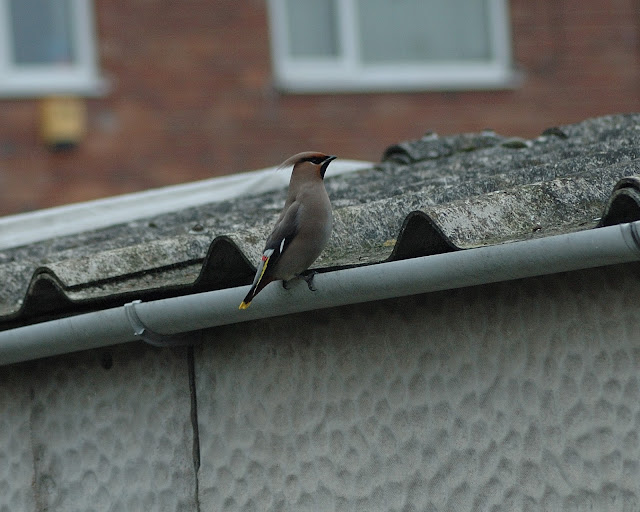