There was only 3 at the starting point, Alan J, Ian D and myself although after 20 mins we were joined by Keith B who had already done at least a 3 mile walk before joining us.   Keith had seen a Redstart in the reserve on his way to joining us along with a few other things but as its now 2 days since him telling me that I have forgot.  Anticipating the fact that I forget things I got Alan J to hold up the Hide Book where he had scribbled written neatly some of the things we saw collectively today. 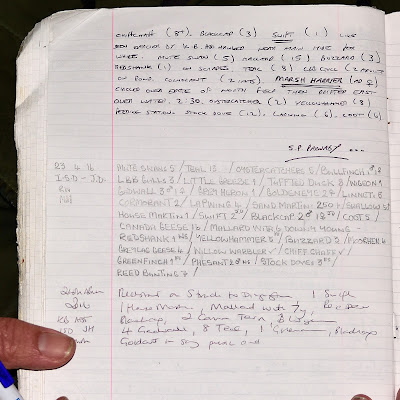 The first new batch of wildlife was a Mallard with 7 young which I failed on more than one occasion to get a decent picture of despite being called for by the others.  The only one I managed was the following which was taken at a distance (obviously). 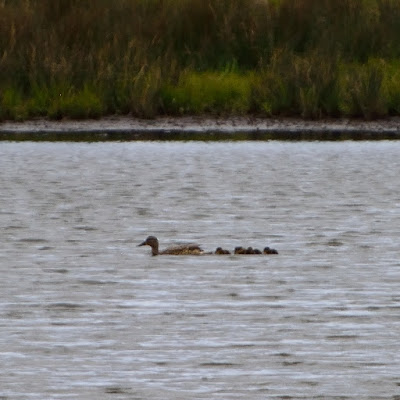 Here are a few others I managed to snap although I didn't take many, if any, on the walk round because it was too blood cold to take my hand out of my pockets and I had gloves on (its getting bog standard for April this bloody weather - climate change, getting warmer (poppycock) although no doubt the Met Office or some such organisation will bring out a set of figures showing it was the hottest/driest/wettest/coldest/sunniest (Delete as appropriate) April since records began.


Plenty of Chiff Chaff and Willow Warblers around 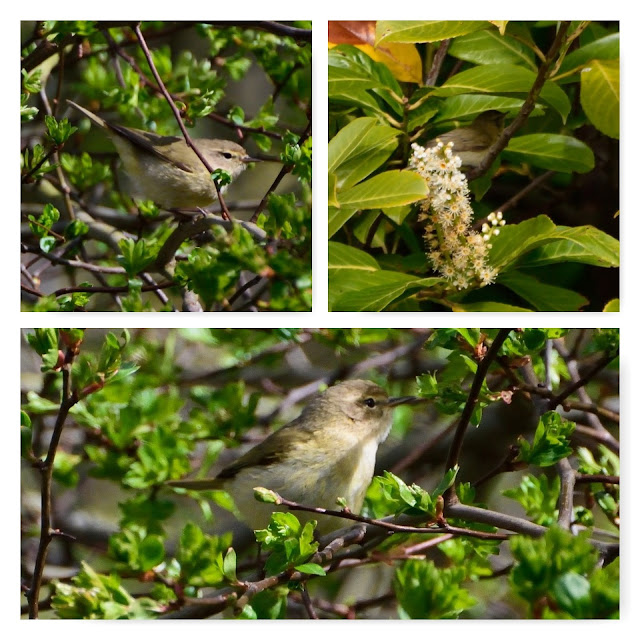 A few Swans around some energetic some not 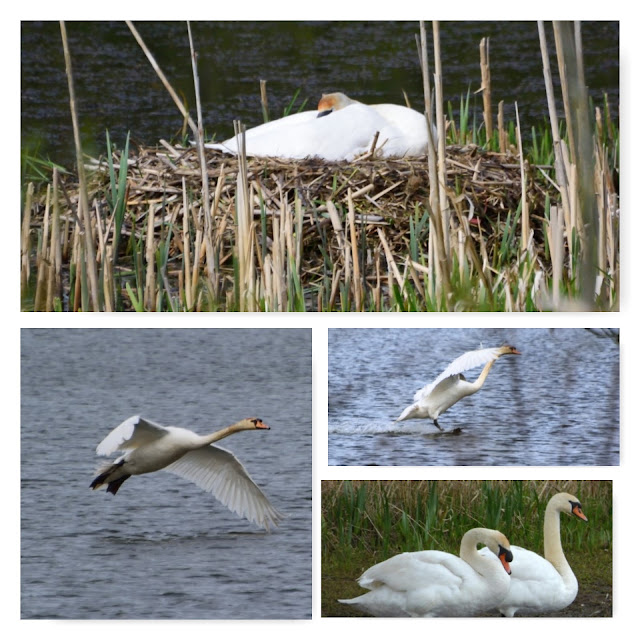 Plenty of Sheep and Lambs in the ever changing Stafford Farm 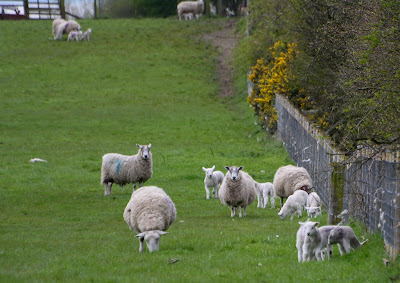 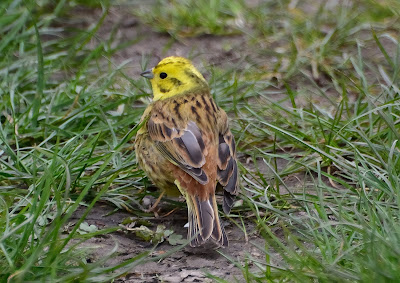 A couple of distant shots of a pair of Common Tern that have been around for a
couple of days now, although as soon as they appear an Otter has shown its face
for the first time for a while 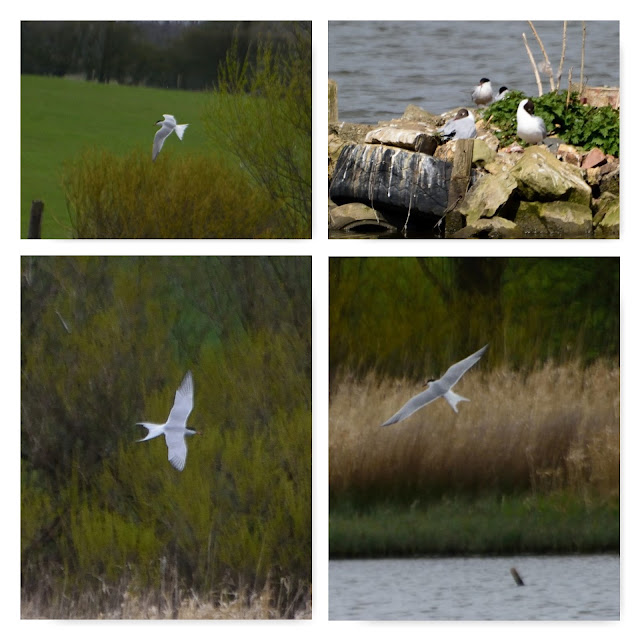 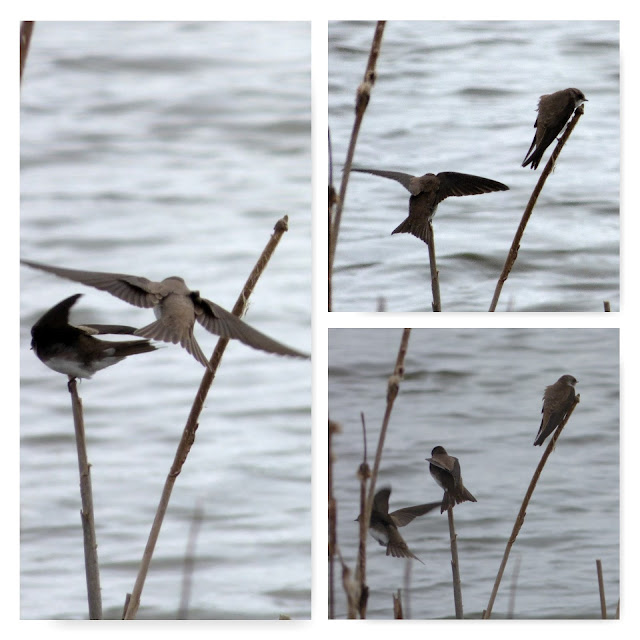 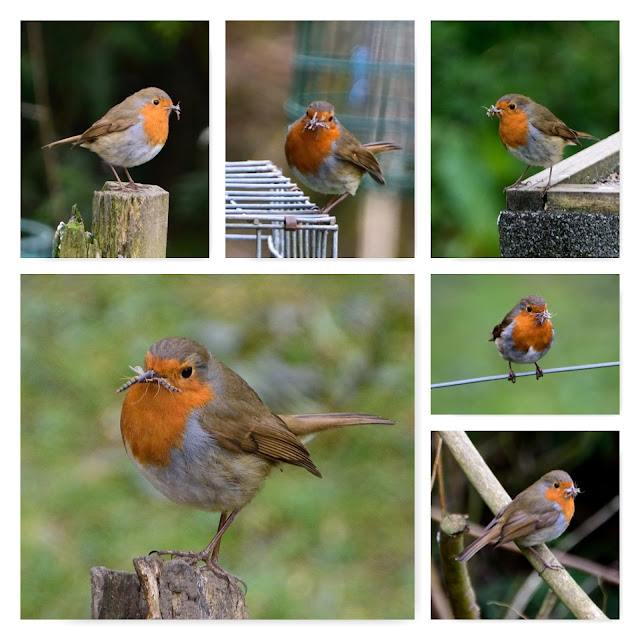 Although this little guy seems to be particularly greedy 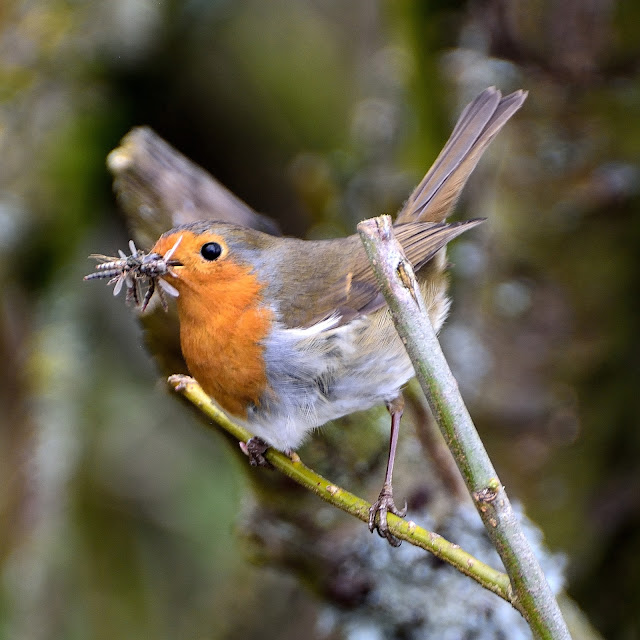 Well, thats about it apart from the video which contains some quite good footage this week although the commentary was sort of hogged by one guy today, have a listen and see if you can figure out who it is.  I also did another underwater camera video which was a bit lighter than last weeks although the camera seemed to have fallen over after I placed it in but there is still a small excerpt there showing at least 2 Newts if not 3.  Someone please have a look and tell me which they are?

Great walk as usual apart from the muscle wrenching legs of Arnie and the balancing skills of Blondin were needed to plodge through the mud after the forecasted Saturday of cloudy but dry was tossed into the corner by some of the hardest/largest hailstones I have seen in a long time came teeming down in the Tyneside area.  The walk was the usual chit chat about dog walkers, cyclists, horse riders, birders and toggers we have known and a TV Club (bit like a book club but you don't have to know how to read or have gone to University) and watching for a few birds inbetween.  Ones we failed to see were Wheatears, Blackcaps (although I did see a couple briefly from the hide), Cranes (3 flew over on Saturday), Red Legged Partridge (everybody else seems to have seen it) and a couple of Black Tailed Godwits (which didn't arrive till today which only Graeme B saw).  Well thats enough of a preamble so on we go with what we saw (well I will put a few pictures and a video up as a couple of my typing fingers are a bit sore (yes, I can use all 10 at the same time without looking at the keyboard) as I hit them with a hammer a couple of times today whilst renovating my Lean To in the garden to save me the cost of a new one (£200).

So here are some pretty pictures of some of the  things we encountered that day: 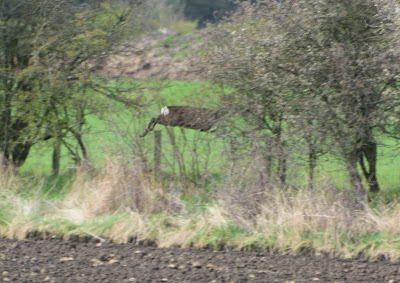 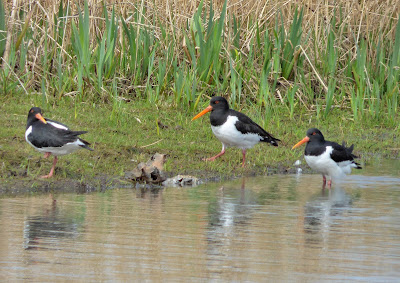 The following is a video of some of the above and other thing we saw today.  The last part of the video is an excerpt from a SJ4000 matchbox cam which I placed in the dipping pond about 2ft down for an hour on continuous recording.  It shows a Newt making its way across the bottom of a very muddy pool.  Will try this again later when the water is a bit clearer.

Finally a few excerpts from a multi matchbox camera (2) session in my garden shot in a couple of hours one afternoon, mainly goldfinches but includes most of the other garden birds

Alan J, Ian D, Keith B and myself set of for the normal Sunday morning wander although Keith left us after a short while, then rejoined us then left us due to an urgent meeting with a red nosed albino nordic bit of stuff
(btw Keith I got a picture of your date although it flew off as soon as I got the camera out) 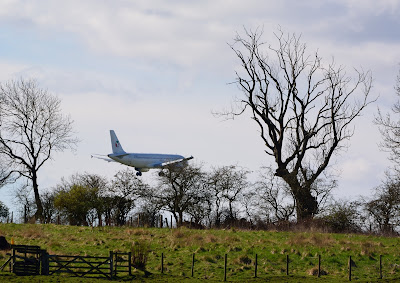 Anyway, back to the birding.  What a lovely day although in places there was a slight chill due to the wind in places.  3 Great Crested Grebes had been on the pond and 3 Oystercatchers were on the island although a couple of us thought we had seen 4 (but couldn't get that past the Bird Rarity Committee).  A Marsh Harrier had been seen (and photographed) a couple of days ago but not by any of us unfortunately.  The Mute Swan nest is being occupied by Mrs Swan at Little Waters and
Mr Swan seems to commute between Little and Big all the time. 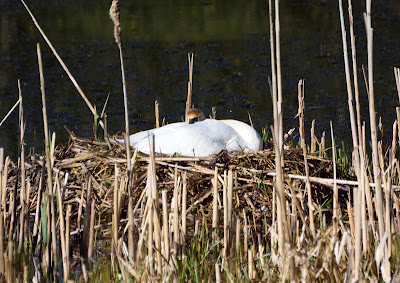 A noticeable movement of Meadow Pipits was noticed by Alan J, as we walked the Northern extremity, heading S to N.  Redwing and Fieldfare were noticeable by their absence although Ian had seen 4 Fieldfare earlier on in the week.  A couple of Kestrels were also noticeable in more than one place as we walked around.  Back in the hide John D was doing a bit of ringing although he had only had caught up to 10 birds at the time although there was plenty in the Feeding Station including a couple of unringed Willow Tits.  Well here are a couple of pictures from the walk, didn't take many actually as it was such a pleasant day.

A Sparrowhawk putting the willies up quite a few birds 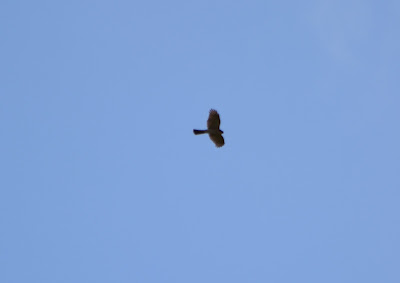 My first picture of a Chiff Chaff this year 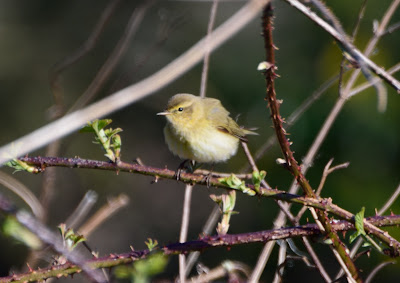 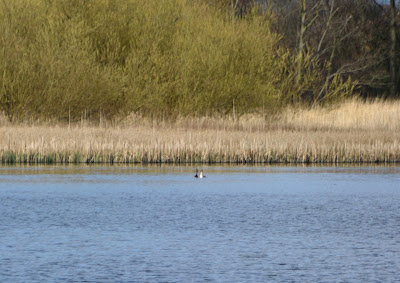 An ever increasing Pile of Sh**e 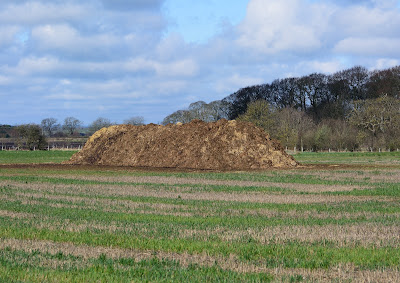 Normal view of the Tunnel but from the other way 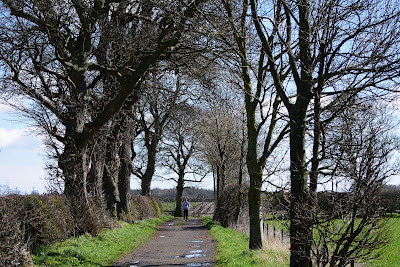 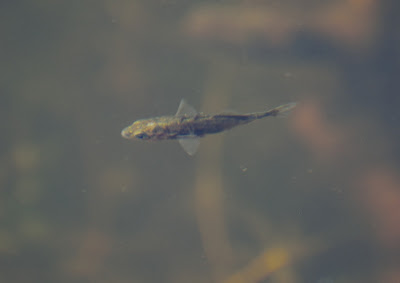 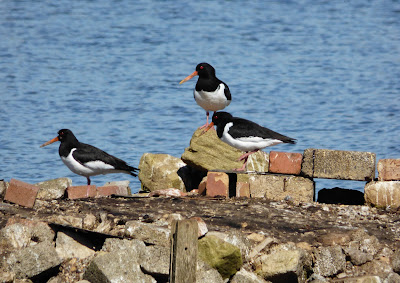 Finally a short video compilation of bits and pieces, some decent(ish), some bad
and all comments are views of those speaking and not of their employers
(PML)

The gang (Me, Ian D, Alan J, Keith B and Mick M (on holiday from the rest of the world))gathered at the public end and off we went although it wasn't long before we lost Keith as he went to tick Goldcrest which Alan and Mick had heard although Ian and I don't bother with the high register stuff due to our medical problem (old age).  Keith rejoined us before we got back to the pond and was with us for the rest of the walk although he did a bit of conversing with Mick on seat configurations in Airbus 300 and 340s or some such flying things.  The subjects of new series on TV, old series on TV, Avis Car Hire, at least a dozen countries in the world (all of which Mick had been to in the last few weeks), big lens cameras (Nikon 900), working times of farmers, tax exemptions, The Toon/Sunderland/Championship, Tories, eating out, good looking women (I might just have daydreamed about that though), the weather.  We eventually got round to looking for birds and were quite successful although how good will depend on whether Keith reached his target of 50 or not.  Some of those we did get to see were 4/5 Buzzards, Red head Smew, Curlew, 30-40 Linnet, Meadow Pipits, Oystercatchers, Bullfinches, Song Thrush, Chiffchaff, Lesser BBGs, Snipe as well as the usual suspects.  So enough prattling on and here are the pictures and a short video. 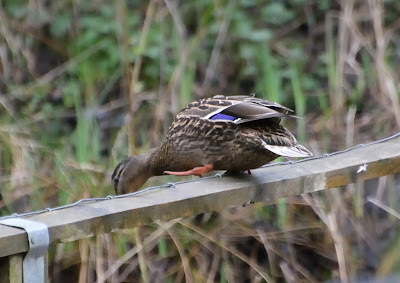 off she goes but unfortunately only scored a 5.6 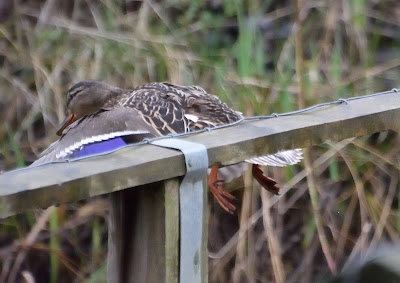 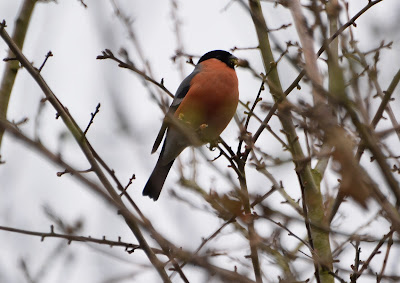 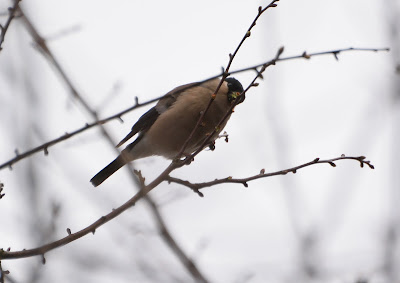 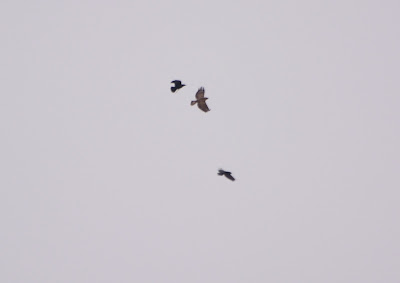 Oystercatcher arriving for a Paddle 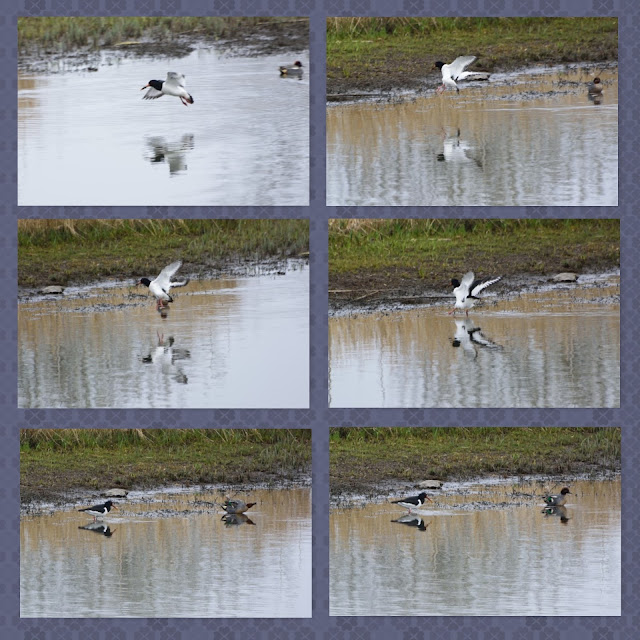 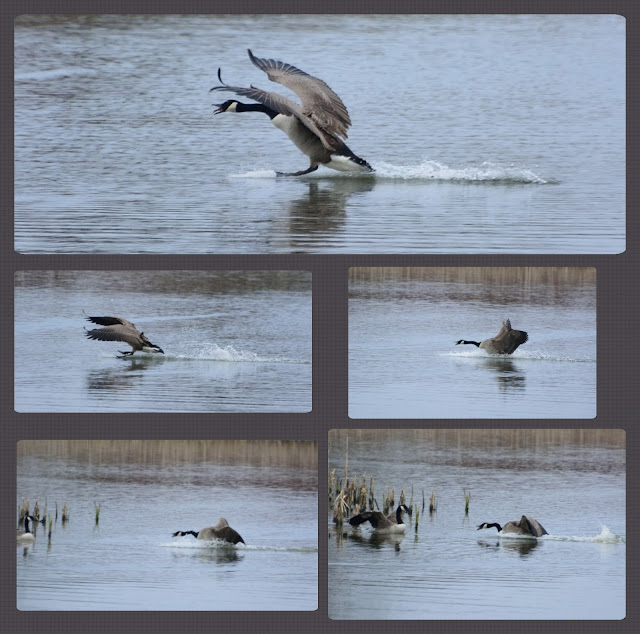 ...then they get very pally 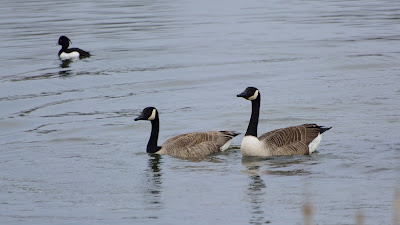 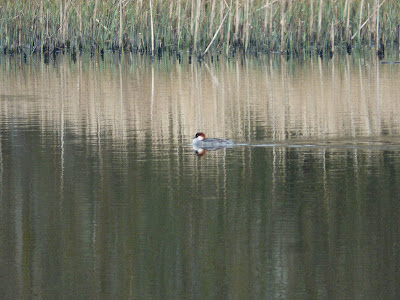